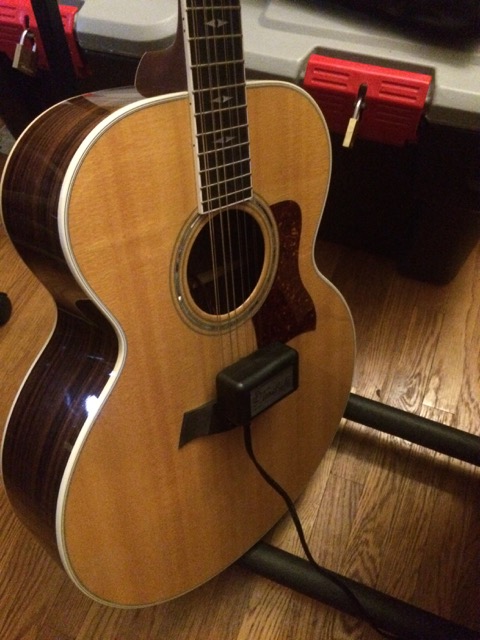 I purchased a guitar tonerite a few weeks ago to see if the device lived up to the hype. I have so many acoustics that sit in cases for long periods of time, I thought it would be nice to keep them all ready to go and “played in”. The first guitar I tried to wake up was my early to mid 1970s J-200. This guitar has been with me perhaps the longest and has been played perhaps the least amount of time. It was always pretty good for a background strum track in a rock song but not much else. For a giant sized maple guitar it has always had a pretty small voice. After 24 hours on the highest setting, the guitar was slightly louder and had noticeably more sustain and a sweeter midrange sound. I kept it cooking for another two days and found there to be no difference after the initial 24 hours. In conclusion the tone did improve, perhaps not as much as I would have liked. Next on the tonetite was my seldom played early 90s Taylor 855-12. This beautiful beast always sounded weak to me as well. After 36 hours, it was a completely different guitar. Wide open in the mids and the month old strings rang out like a crisp piano which I have never heard on this guitar. I kept it on the tonerite another 2 days and each time I tested the guitar it sounded better and louder. The improvement in the Taylor was beyond my expectations. Perhaps I’m imagining this but it also holds tune better and is easier to play. I would attribute that to the stiff sitka top loosening up a bit. Of course I would need a luthier to bolster that opinion before I called it science. One other note, I changed the J-200 strings down a 1/2 size to medium light and have found the guitars sweet spot, the tone is seasoned and wonderful. I believe the mediums were to tight and did not let the guitar breath and ring out. I’m certain that’s counter to how it should work but my ears are pretty good and I know what I’m hearing! In conclusion, the darn thing works, that is all! https://www.tonerite.com